95 million years in the making, this iconic Outback town unearths some real treasures.

Situated 1250 kilometres inland from the east coast of Australia, the small western plains town of Winton is considered to be well and truly Outback Queensland. But it wasn’t always this way. Where today, emus and brolgas wander over sun-bleached plains, ninety-five million years ago the area was covered in swamps and lakes fed by permanent rivers and surrounded by dense vegetation. Dinosaurs lived and died on the shores and in the shallow water, where their bodies and footprints were quickly covered in mud and silt.

The rocks around Winton yield evidence of land-dwelling dinosaurs – long-necked, long-tailed, tree trunk-legged Titanosaurs; chicken-sized Coelurosaurs; and the carnivorous Australoventor, which shredded its prey with its claws as curved and sharp as sickles. Today, these animals are preserved as bones and teeth, and as spectacular trackways of footprints.

Winton is the ‘Dinosaur capital of Australia’ and for Dinah and me, our final destination and the furthest west we were travelling on our Outback journey. Famous for red dirt, brightly coloured opals and prehistoric dinosaurs, we were really looking forward to visiting this iconic Queensland Outback town. It’s a long, flat, dry 180 kilometre drive due west from Longreach, so we were happy to reach our destination and check in at the Tattersalls Hotel and Caravan Park: www.experiencewinton.com.au Located in the centre of town, this in excellent place to set up camp. Most sites are grassy and large, and the amenities are good. The caravan park is just across the road from the famous Tattersalls Hotel, which can be dangerous thing on a hot Winton day. In the 5 days we were in Winton, we got to know Matt behind the bar. He’d see us crossing the road from the caravan park in the late afternoon and two ice-cold beers would be waiting for us on the bar. Our reward for a solid day of exploring!

Winton is a small town of just 1,130 residents, yet there is so much to see and do. The town has a rich history with links to the Great Shearer’s Strike of 1891, Waltzing Matilda and QANTAS. But Winton is also well known for something far more ancient – dinosaurs, attracting tens of thousands of visitors each year to explore ‘dinosaur country’. The first official dinosaur discovery was made in 1962 on Cork Station, a fossilised footprint, with the site later revealing a stampede with over 3,300 footprints. Later discoveries included the largest dinosaur found in Australia, a 20-30 ton Sauropod nicknamed ‘Elliot’, as well as the largest dinosaur to walk the earth, the Titanosaurs.

There is no end of opportunity to get involved with our Jurassic friends in Winton, from exploration of the surrounding countryside to the Dinosaur Walk in the beautiful old Corfield & Fitzmaurice General Merchants heritage-listed building in the centre of Winton. But for the ultimate dinosaur experience, a must-visit is the Australian Age of Dinosaurs Museum, home of the world’s largest collection of Australian dinosaur fossils and the most productive fossil preparation laboratory in the Southern Hemisphere.  Here you’ll meet famous Australian dinosaurs including ‘Banjo’ (Australovenator winonensis), the most complete Australian carnivorous dinosaur ever discovered, as well as many giant plant-eating Sauropods.

The museum is located on top of an ancient mesa called “The Jump Up”, with huge rocky outcrops, cliffs, canyons, and spectacular view across the flat red plains. You turn off the Landsborough Highway (as you approach Winton from Longreach) and the travel 12 kilometres inland on a sealed road. This is a fantastic place to visit, with so much to see and do. Allow the best part of a day to really enjoy the experience. There are also gifts and souvenirs on sale as well as coffee and refreshments. Wear sturdy walking shoes as the terrain is rocky, and if you plan to visit in summer, wear a hat and bring water. This place is extremely popular so be sure to book ahead for the guided tours of the Dinosaur Collection, Fossil Preparation Laboratory and Dinosaur Canyon and Stampede Exhibition. For more information and to book, go to: australianageofdinosaurs.com

“Who’ll come a Waltzing Matilda with me?”

Winton is also known as the home of Waltzing Matilda, with A.B. (Banjo) Paterson writing our national song in 1895 whilst visiting nearby Dagworth Station. Fittingly, the first museum in the world dedicated to a song is located right here on Elderslie Street (the main business street) in Winton. The original museum opened in 1998 but was destroyed by fire in 2015. The Waltzing Matilda Centre was rebuilt and re-opened in 2018. This is a fantastic centre, from spectacular contemporary outback-inspired architecture to state-of-the art interactive technology embedded in the displays. In the museum we were able to hear locals share their story of growing up in Winton, see beautiful photographs by local photographer Peter Knowles, tour the Outback Gallery and see some of the historic machines and implements that helped forge this part of the world.

This is a spectacular example of a world-class museum rightfully located in its place of origin. Sure, you will travel thousands of kilometres to see and experience the Waltzing Matilda Centre, but it is worth every kilometre. As usual, our advice is to book ahead as the museum is usually very busy.  Check it out at: www.matildacentre.com.au

The jewel of the Outback

Dinosaur fossils aren’t the only precious items found in the ground around Winton. The area is renowned for opals, some of the very best in the world. When the area was settled in the late 19th century, the region’s low annual rainfall made it ideal for sheep, and up to 1.5 million sheep have been grazed during past good seasons. The opal mining industry also flourishes in Winton and has for more than a century. Some of the best boulder opals in the world have been found from claims within the Winton Shire. If you are really serious about opals, you can visit the 1900 century town of Opalton, about 123 kilometres south-west of Winton where you can fossick for your own opal in the public fossicking area at the Opalton bush park, or a little closer to home, you can walk the main street of Winton and discover any number of shops displaying and selling opals, some still imbedded in their mother rock. Great jewellery or simply a great souvenir of the region.

The heart of Winton

During our stay, Winton never ceased to surprise. For a little town there is a lot going on. The main street is full of interesting shops and, of course, the Waltzing Matilda Museum. There are also a number of famous watering holes here. Our favourite, Tattersalls Hotel was a great place for a steak sandwich and a cold beer at lunch-time. Then there is the Winton Hotel on Cork Street and in Elderslie Street, the Australian Hotel and directly opposite, the North Gregory Hotel. The North Gregory is the heart of Winton’s history. More than just a hotel, it is part of many significant movements in Winton’s history. Burnt down and rebuilt twice, the hotel is perhaps best known as the location for the first live performance of Australia’s honorary anthem Waltzing Matilda in 1885. It is also the most modern hotel in Winton with art deco-inspired guest rooms, bars, a dining room and even a French Café. For those travelling without their own accommodation, the North Gregory is the perfect place to base yourself in Winton. For information and bookings: www.northgregoryhotel.com

And what about the nightlife?

Reserve a table for dinner in Winton? Absolutely! At night, this little town comes alive as the many visitors look to enjoy dinner under an Outback sky. Dining outside Tattersalls Hotel is extremely popular, with the hotel ablaze with lights. But you may need to book. After dinner how about a movie? The Royal Open Air Theatre, one of only two of its kind still operating in Australia, is home of the Vision Splendid Festival and screens movies a couple of times a week. From April to September, Wednesday night is ‘Nostalgia Night’, screening old movies and classics such as Movietone News under the stars. Canvas seats, popcorn and dare I say it, jaffas down the isles! An incredible experience. And during the day, The Royal is a Theatre Museum with a fantastic collection of movie memorabilia.

We spent five days in Winton. What a fantastic experience. So much history, so much to do. It is worth every kilometre of the drive.

Time to hit the road. Dinner and a final beer at the bar at Tattersalls Hotel, a quick farewell to Matt, an early start the next morning, and we were on our way home. Thank you, Winton for an unforgettable experience.

Main picture: A friendly welcome to the Australian Age of Dinosaurs 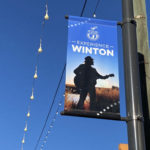 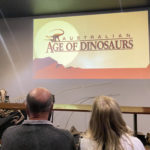 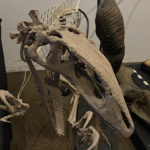 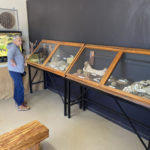 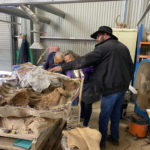 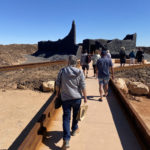 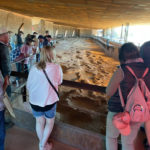 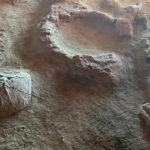 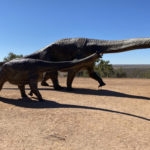 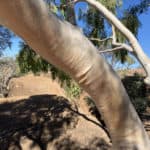 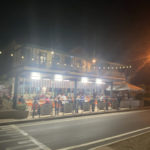 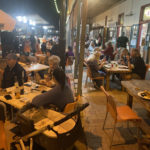 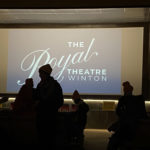 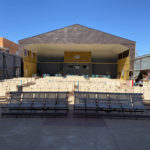 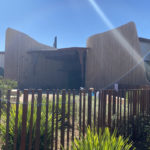 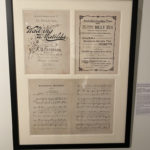 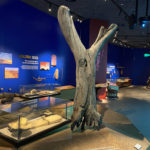 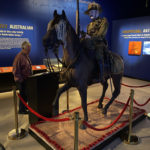 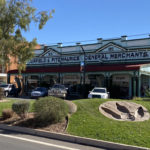