The Museum of Old and New Art. The most outrageous collection of art and antiquities.

In July 2016 I visited Hobart for the first time to attend a national University Deans of Arts Conference, hosted by the University of Tasmania. A great conference and very enlightening. But perhaps the most enlightening aspect of the conference agenda beyond the robust academic conversations was the visit to MONA, the Museum of Old and New Art.  What an experience! Some argue that this museum was single-handedly responsible for putting Tasmania on the map. Or more accurately, back on the map, for while Tasmania has always been a popular destination for Australian holiday makers due to its historic significance and breathtaking natural beauty, MONA has attracted a whole new demographic of visitors to the ‘Apple Isle’ from Australia and around the world.

Introducing MONA in the gallery’s seminal book The Making of MONA, renown art scholar and Director of the Art Gallery of New South Wales from 1978 to 2011, Edmund Capon states “In Australia, maybe the future has already arrived – at a place that redefines the term ‘art gallery’. Like the Sydney Opera House, it’s a piece of art in its own right; a subterranean world in an unfashionable working-class suburb of Hobart, in Tasmania. Welcome to the Museum of Old and New Art: MONA.”

As Edmund Capon identifies, MONA is more than an art gallery showcasing contemporary works, it is also an architectural masterpiece of innovation. In a most unlikely location. MONA is not a museum or gallery in the conventional sense. It is the collection of one individual, creator David Walsh. One might argue that MONA is in fact the playground and artistic and societal voice of David Walsh, an unusual character who grew up in Tasmania, dropped out of university, played cards, won, did some other stuff, and opened a small museum of antiquities to which no one came. He declared it a triumph and decided to expand. According to the publication Tasmanian Arts Guide, the result is MONA: a subterranean bunker housing Walsh’s private collection of art and antiquities; and a temple to secularism, rationalism, and ‘talking crap’ about stuff you don’t know much about.

MONA is Australia’s largest privately-owned museum and includes more than 2000 artworks, antiquities and ethnographic pieces. The collection ranges from Egyptian funerary objects to some of the world’s most infamous and thought-provoking contemporary art. Since opening in January 2011, it has welcomed more than 1.4 million visitors.

Located just north of Hobart on the banks of the River Derwent at Berriedale, Glenorchy, MONA is also Australia’s deepest museum, constructed like a subterranean labyrinth into the cliffs of the Derwent. An amazing architectural and engineering achievement that takes visitors up ramps and down spiral staircases to caverns of art and antiquities far below ground level. The complex includes the Ether Building Function Centre, Moorilla Winery and vineyard, Cellar Door, Wine Bar and Barrel Room, Void Bar, The Source Restaurant, a 63-seat cinema, the Mona Library and gallery, as well as eight contemporary accommodation pavilions.

Since its opening, MONA has been almost universally endorsed as a significant and welcome intervention into museum design. The atmosphere inside the museum is unlike anything I had ever experienced before. As opposed to walking from room to room on polished timber floors in some old converted warehouse or restored historic building, the journey through MONA is in itself an adventure, combining chambers hewn from solid rock with  theatres of glass and steel. Display after display melding beautifully within its natural setting. As the gallery proclaims, “MONA puts its design energy into producing a limital, topsy-turvy atmosphere to stimulate a level of entertained engagement with art that has rarely been seen in the modern conventional gallery before”. The art world and the public agree, voting with their feet, swarming over MONA’s many levels, marvelling at the hundreds of constantly changing exhibits. Not surprisingly, MONA has been acknowledged and rewarded with myriad architectural, design, art and tourism awards, both nationally and internationally and is regarded as an icon of the Hobart and Tasmanian art landscape.

I and my academic colleagues spent an amazing and unforgettable afternoon wandering the subterranean catacombs of the gallery, viewing some of the most amazing and confronting art you will find anywhere. MONA makes no apologies for the content, some of which is, well, best viewed by those with an open mind and a liberal point of view. We completed our visit with a conference dinner hosted by MONA and the University of Tasmania in their functions rooms overlooking the River Derwent. What a day. What an evening. What a place!

Entry into MONA ranges from $25 to $28 for adults, depending on the time of year. This is a small price to pay for such an amazing cultural adventure.

Getting there is half the fun

On a clear day or beautiful Hobart evening, there is nothing better than a cruise up the River Derwent to MONA, passing under the giant spans of the Tasman Bridge. The museum has been designed to be approached by water, like an island-top temple in ancient Greece awaiting the ocean-borne arrival of the faithful. And like everything related to MONA, the dedicated sea craft that have been specifically designed and built by David Walsh to take you there will take your breath away. The trip between Brooke Street Pier at Battery Point in Hobart on the camouflage MONA catamarans takes around 30 minutes and costs $22. The on-board service of drinks and canapes ensures that you’ll long remember the trip. Or you can go by bus.

As a lasting reminder of your visit and to share with others, may I suggest that you purchase The Making of MONA by Adrian Franklin. Not only is this book a great read as an inspiring chronicle of this amazing place, it will look very impressive on your coffee table!

Main picture: The symbols of MONA, brought to life in the gallery 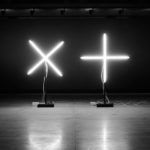 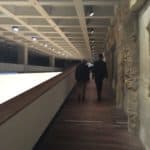 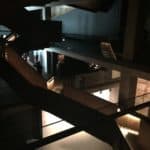 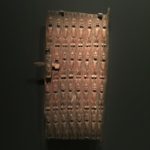 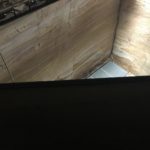 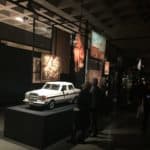 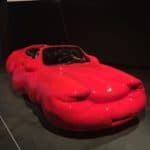 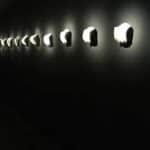 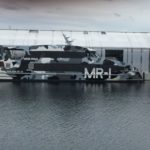 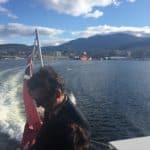 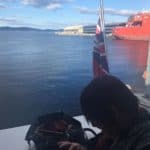 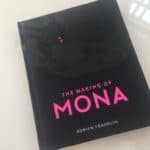 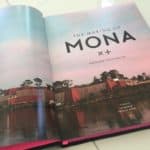