The Sounds Of Silence

All across the land not a sound is heard. It’s Nyepi Day on the island of Bali.

No people, no cars, no motor scooters, no shops, no television, no music, no lights. Not even aircraft arrivals or departures. It’s Nyepi Day, a day of silence across the island.

In 2019, Nyepi Day was Thursday 7 March. Dinah and I celebrated this religious day while staying at the Astari Villas and Residences in Jimbaran on the southern Bali peninsular.

Nyepi Day is the quintessential Balinese New Year’s celebration in the Hindu lunar-based calendar called theSaka which has its origins in South India. Each of the 12 lunar months ends on a new moon, called Tiem. The day after the moon on the ninth lunar month is the Balinese version of New Year’s Day – NYEPI. This is a very important and strictly observed religious day. All activity in Bali comes to a standstill. The entire island shuts down. Cultural police called Pecalang enforce the custom and can even put you in jail.

The day before NYEPI is called Pangerupukan and starts with the Mecaru ceremony. Mecaru in Bali is a sacred ritual that is held to harmonise the relationship between humans and their environment. Animal sacrifice is offered at the cross roads in each village and in every house.

Mecaru is followed by Ogoh and the Ogoh-Ogoh parade. Ogoh-Ogoh is the stature which normally embodies mythological beings, mostly demons and is made of bamboo, woven matting, papier-mache and sponge and is carried around the district by a Balinese orchestra, the Gambelan. The main purpose in making the Ogoh-Ogoh is the purification of the natural environment of any spiritual pollutants emitted from the activities of living beings, especially humans. The forms of Ogoh-Ogoh representing the Bhuta-Kala (Bhuta being eternal energy and Kala being eternal time) are varied according to Hindu teachings. The imperceptible potentials of nature cannot be thoroughly explored by anyone. Philosophically, civilised men are required to manage the natural resources without damaging the environment itself. After being paraded on a convoy around the town or village, the Ogoh-Ogoh is finally burnt to ashes in a cemetery as a symbol of self-purification.

At dawn there is silence, as Nyepi’s observances begin and continue for the next 24 hours. For all Balinese, Nyepi is a time to reflect on the past year and any transgressions that may have been made. People also contemplate on how they can become a better person in the New Year. It is a day of silence, prayer, fasting and meditation. The Balinese are forbidden to light fires or use electricity, drive or go for a walk outside, listen to the radio or watch television. Family members speak in lowered tones. Priests and all Balinese Hindu members fast and do not take a drink.

Some people have been led to believe that by creating an appearance of absolute calm and abandonment, the few stubborn evil spirits that still remain after the previous day’s exorcism will drift away. Hindu scholars explain differently. The noise on Nyepi is not designed to scare the demons away but rather, it is intended to wake them so that they will take note of the offerings that have been provided for them. The quietude on the day after is not intended to trick the evil spirits into thinking that everyone has left, rather it is a symbolic showing of how the forces of evil are satisfied and will not bother anyone anymore.

Melastior Melis Day (3 days before Nyepi Day). A purification ceremony is held in welcoming “Nyepi”. It is a long procession of Hindu adherents carrying temple effigies and other sacred symbols, heading to beaches or springs where the purification rituals are held throughout Bali.

Tawur Agung Kesangaor Pengerupukan Day (1 day before NYEPI Day). Held to welcome the Nyepi holy day at every family village or compound followed by a procession of Ogoh-Ogoh.

For Dinah and I, Nyepi Day was a real experience. No lights, no television, no travel. We couldn’t even leave our hotel. A day of complete peace and tranquillity. The way the world should be?

Tourists staying in hotels and resorts in Bali on Nyepi Day will be provided with information by the hotel on how this Hindu religious day will affect them. In most cases, basic hotel services will continue, though some services such as bars, restaurants and spas may have reduced access and opening times. It will however mean that you will not be permitted to leave your hotel for the 24 hour period of Nyepi, 6.00am to 6.00am, so it will be wise to stock up on any commodities you would normally purchase outside your hotel for this period.

Main picture: The mythical Ogoh-Ogoh leads the parade on Nyepi Day across all of Bali 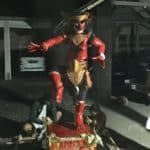 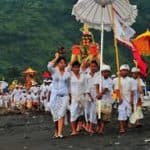 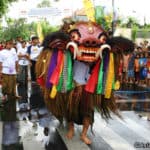 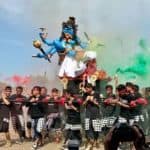 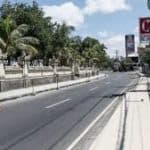