Ten days of intensive research and a little R&R in the epicentre of global advertising.

Writing has always been a passion of mine. For over 30 years, it was my profession as I built a successful career as a copywriter with major advertising agencies, including my own in Australia and the UK. More recently my writing skills supported a career in academia. Turning my hand to travel writing is allowing me to combine my two great passions – travel and writing.

In 2009, I submitted a proposal to a major international book publishing company to write a seminal text on ‘account planning’, the discipline associated with the leveraging of consumer understanding in the marketing and advertising of products and services. As an advertising practitioner, understanding why people behave the way they do in a purchase situation, understanding why they buy what they buy has always fascinated me. Account planning as a discipline is widely applied in Australia, the United Kingdom and the United States. It is a burgeoning discipline in Asia, India and China as these regions grow to become major consumer markets.

As a precursor to writing the book, my objective was to interview leading account planners in the UK, Asia and Australia as well as in the United States, the world’s most influential consumer market. To this end, in late 2010 I embarked upon an intensive research trip to New York, the epicentre of American advertising, talking with and recording the views of leading account planners in a number of the world’s most innovative and influential advertising agencies. The outcome would be a ‘virtual’ round table discussion with a number of the world’s leading planners, the objective being to explore and interrogate current points of view on the creation of effective advertising and consumer communication in the digital space.

I have been to New York City on a number of occasions and had established strong industry contacts here. Through my relationship with the 4A’s, the American Association of Advertising Agencies, I was able to organise to meet and talk with account planners from eight major advertising companies including the 4A’s, BBDO, Leo Burnett, Media Com, RGA, People Ideas and Cultures (PIC), O&M and Mindshare. These interviews augmented intelligence gathered through interviews with account planners in Australia, New Zealand, Singapore, Malaysia and China as well as considerable desk research already undertaken in Australia.

I had mentioned to my son James that I was planning a trip to New York to fast-track research for my book. After some discussion it was agreed that he would accompany me. James had never been overseas before and so this was an ideal opportunity for his first trip to one of the world’s most exciting cities.

The Upper West’s the best

Whichever way you look at it, Australia to the East Coast of the US is a long trip. 14 hours flying from Sydney to Los Angeles and then another 5 hours across the States to New York. With the time difference, we actually arrived in New York a few hours after we left Australia, at around 6.00 in the evening. On previous visits to New York City I have stayed at the Imperial Court Hotel on W79th Street, off Central Park West. This is a well-priced, comfortable hotel with a homely atmosphere in an area that provides a distinctly different New York experience, yet is just 1.5 kilometres from Times Square. Check it out at: www.imperial-court-hotel.new-york-metropolitan-area.comThe Upper West Side is home to the Lincoln Centre which hosts performing arts institutions including the Metropolitan Opera and New York City Ballet, and amid the grand apartment buildings of Central Park West you’ll also find the Museum of Natural History. In the Upper West Side, the footpaths are wide and treed and the locals are very friendly.

The Upper West Side also offers a real village atmosphere with restaurants, bars and interesting shops aplenty. This is a unique piece of Manhattan, away from the glitz of Times Square, yet only a 5-minute walk to Central Park, and just a 15-minute US$2.50 subway trip to Times Square, 42ndStreet and importantly for me, the business districts of Midtown and Lower Manhattan.

We arrived at JFK airport at 6.00pm on a Saturday evening and it was 8.00pm before we had negotiated US Customs and Immigration, cabbed it in to Manhattan and checked into our hotel and unpacked. Having settled in, we set out to find a restaurant for dinner, which is definitely not a problem in this area. After dinner, I suggested we have a quiet drink at one of the local Irish bars that I had discovered on previous trips, the Dublin House Bar Room which was far too conveniently located about 100 metres from our hotel on W79th Street. We pulled up a stool and ordered a Bud (Budweiser beer). Funny how one gets their second wind even after such a long journey. We made it back to our hotel kind-of late!

Sunday morning, out of bed a little later than normal, feeling like we’d earned the sleep-in. A late breakfast/early lunch and then we spent the rest of the day sightseeing. It is not too far to Times Square if you walk down Broadway. This is an amazing city and James was completely blown away. It’s hard to imagine that here he and I were, walking down one of the world’s most famous streets in one of the most dynamic cities on the planet. Walking is by far the best way to explore any city and New York is no exception. Indeed, it is a walker’s paradise with the avenues running north/south the length of Manhattan Island and the streets numbered and identified as East or West. You simply can’t get lost and the simplistic street layout is super handy when you are searching for an address.

A great weekend, but now it was time to get down to business. I had meetings with agencies and account planners scheduled every morning and afternoon the coming week. Fortunately all the agencies were located in Manhattan and within a reasonable distance of each other. I’d organised the meetings so that James and I could lunch together before my afternoon meeting. Then I’d either meet James outside the offices of my afternoon meeting, or back at the hotel.

First up on Monday morning was BBDO. BBDO is one of the world’s largest and most successful advertising agency groups, with offices world-wide. Indeed, I had worked for BBDO in Australia for 5 years and had spent some time with them in London. The meetings all went very well throughout the week. The agencies were extremely welcoming and open and the planners I talked with really appreciated my interest and passion in their discipline. After five days I felt that I had gathered an immense amount of information and valuable insights into their profession and its origins, as well as their opinions on the future of consumer communication and specifically, as it related to social media.

James spent his days exploring Manhattan. On one particular day he walked from Battery Park in Lower Manhattan to the Bronx – over 100 city blocks! The Empire State Building, Madison Square Gardens, the Chrysler Building, Grand Central Station and the Rockefeller Centre – all were on his to-see list. Evenings were our time together. New York City never sleeps and there is just so much to see and do. Most evenings we’d eat locally at one of the dozens of restaurants and eateries dotted throughout the Upper West Side, then walk or take the subway to explore other parts of the city. While Times Square is very touristy, it is still a fascinating place to be in the evening as the advertising signs come alive and the lights shine brightly on the thousands of tourists that flock to this famous intersection every night. Times Square is also the heart of the theatre district. One evening we caught a show, Jersey Boys. Spectacular! Nothing beats Broadway live. Then dinner at the legendary Brooklyn Diner on W43rdStreet.

One of my favourite places in Times Square is the M&M store. Only in New York will you find a small chocolate confectionary brand commanding three floors of the most expensive retail real estate in the world. I actually have in my office one of the famous M&M characters in the guise of the Statue of Liberty. Times Square is also home to Toys R Us as well as one of the best Hard Rock Cafes in the world, with amazing displays of rock and roll memorabilia including a complete collection of LP records signed by all four Beatles. As an ardent Beatles fan, to die for! For fans of Forrest Gump, there’s the Bubba Gump Shrimp Restaurant. Great seafood and a souvenir t-shirt to take home.

A solid week of meetings now over, James and I had the weekend in New York before flying home on the Monday. Saturday morning we decided to take the Statue of Liberty cruise. Definitely not to be missed, the Statue of Liberty is a New York icon and a symbol of world peace. The cruise leaves Battery Park for Liberty Island where you can disembark for a closer look at the monument. Returning to New York, you call in at Ellis Island, once the first port of call after a long sea voyage to New York for hundreds of thousands of immigrants from all over the world. The history here is fascinating and really is the story of this city and country.

Walking up from Battery Park you pass through the financial district of New York and Wall Street. How many fortunes have been made and lost here? A photograph by the raging bull at the entrance to the district is mandatory. Next stop, the 911 Memorial. The new Freedom Tower was still under construction and there was an atmosphere here that told of suffering and immense courage. Who can forget that news footage? I defy anyone to walk away from this place without a tear in their eye.

What a weekend. We explored Central Park, one of the great spaces in any major city that I have ever visited. This is a magic place with something different at every turn – lakes, castles, shady walkways, expansive green lawns, tunnels, cafes, restaurants and street performers encouraging crowd participation for a ‘small donation’. I believe that this park truly is the heart and soul of Manhattan, and so does Yoko Ono who has dedicated a section of the park, ‘Strawberry Fields’ to her late husband John Lennon. Strawberry Fields is directly across Central Park West and the Dakota Building where John was killed in 1980. Nearby on Central Park East is the Metropolitan Museum, ‘The Met’. James and I spent our final Sunday afternoon here. We could have spent a week.

One final Bud at the Dublin Room Bar, where after a week of drinks after work we had been adopted as locals, then time to pack for our flight back to Australia on Monday morning. We’d only scratched the surface of this great city. We’d be back. 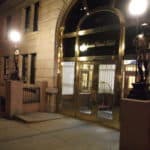 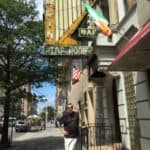 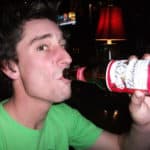 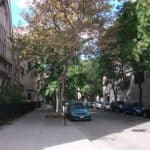 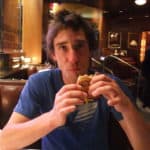 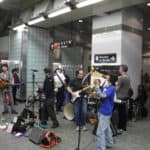 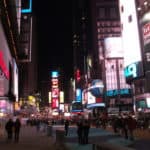 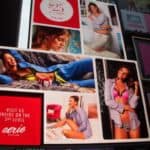 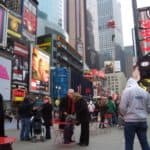 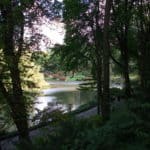 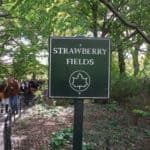 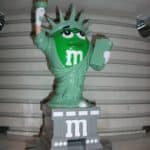 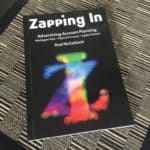