A city so great, they named it twice!

What hasn’t been written, said or sung about New York? Immortalised in the Frank Sinatra classic New York, New York (actually referring to New York City in New York State), New York is one of the most dynamic and exciting cities in the world. And one of the most desirable to visit. Indeed, it is said that you have to visit New York at least once in your lifetime. However, New York is far more than just a city, it is a global powerhouse exerting a major influence on the world’s economy, entertainment, media, education, art and technology. And of course, tourism.

I am extremely fortunate to have had the opportunity to visit New York City on a number of occasions in my capacity as both an advertising practitioner and in recent years, as a university Professor of Communication. If you have ever watched the hit series Mad Men on television then you’ll recognise that New York City and specifically, Madison Avenue is the home of modern-day advertising and it is the global headquarters of the world’s peak advertising industry body, the International Advertising Association (IAA). New York is also where you’ll find a number of the world’s great universities. My professional and university roles have allowed me to visit and build relationships with many New York institutions; advertising industry associations, advertising agencies, film and television studios, acting academies, as well as notable universities. On a number of occasions, my wife Dinah has been able to join me.

New York is the largest city in the United States and comprises five separate boroughs; Staten Island, The Bronx, Brooklyn, Queens and Manhattan. It is a city of almost 9 million people. Manhattan is the commercial heart of the city and where you’ll find locations such as Wall Street, 5thAvenue, the Empire State Building, Central Park, the Metropolitan Museum of Art (the MET), the Rockefeller Centre, Broadway and Times Square, as well as legendary up-market department stores including Saks 5thAvenue, Bloomingdales and Macy’s. If you are looking for a peaceful, quiet time, then NYC may not be for you. New York is a high-octane city that never sleeps. By day, it is teaming with millions of people busily going about their business, alongside residents and visitors. By night, it’s all glitz and glamour as the lights go on – and then stay on until dawn. So be prepared to be amazed, entertained, excited, and inspired.

Flying into New York, you will arrive at one of the city’s three major airports. Depending on which country you are entering from and what airline you are flying, you’ll arrive in the U.S. at either John F. Kennedy Airport (JFK), LaGuardia Airport (LGA) or Newark Airport (EWR) in New Jersey. Flights from Australia via the west coast of the USA generally land at JFK. Distance from the airport to NYC dictates both travel time and cost. From JFK there is a flat cab fare of US$45 (plus tolls and tip) to Manhattan and generally takes around 1 hour, depending on the time of day or night you are travelling. A cab is your best bet if you are arriving later in the evening and have luggage. If you are travelling light you may choose to catch the AirTrain from the airport, then a subway from either Howard Beach Station (for the NYC Subway A train for Lower Manhattan and Brooklyn), or Jamaica Station (for the J and Z trains for Lower Manhattan and the E train for Midtown Manhattan). The cost of the AirTrain is US$5 and there is a flat fare of US$2.50 on the subway. There are also shared shuttle services from the airports, but these may mean being driven around NYC to drop other passengers off at their destinations before yours.

Depending on your nationality and citizenship, you will need a ‘visa waiver’ to enter the United States. For many countries (including Australia), you can apply for a Visa Waiver, referred to as ESTA (Electronic System for Travel Authorization)  online. You will need a valid passport with at least 6 months remaining on it. Your ESTA will allow you to stay in the United States for a maximum of 90 days on business, as a tourist or in transit. Providing you comply with the requirements, ESTAs are issued promptly and are usually emailed directly to you within a day. You then present them with your passport at U.S. Immigration when you arrive. As the ESTA application is for each individual visitor to the U.S., you will need to make a separate application for each member of your family. The cost is US$14 per application. You can apply online at: e-applicationesta.com

So, where to say in NYC?

Most visitors opt to find accommodation in Manhattan. It is central and provides an excellent base to explore all five boroughs and indeed, all of New York State. Many choose to stay in Midtown Manhattan, around Times Square. Again, it is central and one of the best ways to explore NYC is by walking. However, there are hundreds of hotels and hostels to choose from; from 1-Star basic room and board to luxury 5-Star. It really depends on where you want to stay and how much you want to spend. Accommodation in NYC is not cheap, so cost becomes a very real consideration. I have stayed centrally in Midtown Manhattan at the Radisson Hotel on Lexington Avenue. This is a very good business-orientated hotel. I’ve also stayed at the Americana Hotel on W54 Street. Well-priced accommodation, a great central location and an easy stroll to Broadway, the Empire State Building and Times Square. My personal preference however is the Upper West Side of the city, away from the hustle and bustle of the more tourist-orientated Midtown area. On a number of occasions, I have stayed at the Imperial Court Hotel on W79 Street, off Central Park West. This is a well-priced, comfortable hotel with a homely atmosphere in an area that provides a distinctly different New York experience, yet is just 1.5 kilometres from Times Square. Check it out at: www.imperial-court-hotel.new-york-metropolitan-area.com The Upper West Side is home to the Lincoln Centre which hosts performing arts institutions including the Metropolitan Opera and New York City Ballet. And amid the grand apartment buildings of Central Park West you’ll also find the Museum of Natural History.

In the Upper West Side, the footpaths are wide and treed and the locals are very friendly. The area exudes a village atmosphere, with restaurants, bars and interesting shops a-plenty. This is a unique piece of Manhattan, away from the glitz of Times Square, yet only a 5-minute walk across Central Park West to the heart of Central Park, and just a 15-minute US$2.50 subway trip to Times Square, 42nd Street and the bright lights of Broadway.

What to see and do in New York City

How long are you planning to stay? A few days, a week, a month, a year! There is just so much to see and do in this city that no one story can do it justice. Broadway is the home of live theatre, with all the best shows appearing at some time on this famous strip. You can’t visit NYC without seeing a Broadway show. After the show, hang around the stage doors. You may just catch a glimpse of, or even an autograph from, someone famous. Take a walk in Central Park, one of the biggest and most beautiful inner-city parks in the world. It is so big, it has its own Police Force. The changing seasons transform the park four times a year. Marvel at the view from atop the Empire State Building or from the Top of the Rock, the observation deck of the Rockefeller Centre. Meander the avenues, streets, shops and galleries of Midtown Manhattan. On 6thAvenue, one of my favourite places to visit is The Cambridge Gallery. Amongst a number of prominent contemporary artists, the gallery displays a selection of unique mixed-media 3-dimensional New York-inspired art by John Suchy. We have his iconic New York Taxis: The Best Way to Get Around NYC at home. It is a constant reminder of our times in this fantastic city. Suchy’s work in your home will help ensue you remember your visit to New York City – forever.

For something a little more mainstream, you can shop until you drop in Macy’s Department Store on W34th Street, one of NYC’s oldest department stores. Show your passport for a special visitor’s discount. Take a subway to Wall Street and to the heart of the finance world. Walk on to historic Battery Park where the ferries leave for the Statue of Liberty and Ellis Island. Then back to your hotel to get ready for an evening out in the world’s most exciting city.

So, where to start. My next post highlights my top 10 favourite things to do in New York City. I hope it will help you to discover yours.

Invariably, travelling to New York City means hours and hours of air travel, airport layovers and taxi rides to your final hotel destination. Travelling from Australia, it is roughly 14 hours flying time from Brisbane, Sydney or Melbourne to LA or San Francesco, a layover at the airport while we wait for our connecting flight to New York, then 6 hours transversing the U.S. Customs and Immigration upon arrival, then a one-hour taxi journey to NYC and to our hotel. From waking up in Australia for the commencement of our journey to finally going to bed in New York is anything up to 40 hours!

Some tips: book your flights early and pay to ensure you get good seats. In Economy, the best seats are the Exit Row seatsas there are no seats directly in front of you. Yes, it costs but considering that you could be travelling for a very long period of time, it is well worth it. Make sure that you get your entry into the U.S organised. Apply for your ESTA well in advance. U.S. Immigration is very strict and the last thing you need at the end of your long journey is a problem on arrival. Talking about tips, you are expected to tip in the U.S.The customary tipping rate is 15 to 20% for taxi drivers and waiters; bellhops are usually given $2 per bag in luxury hotels, $1 per bag elsewhere. Hotel maids should be tipped $2 per day of your stay wile a doorman who hails a taxi for you can be tipped $1 to $2.

To get around New York City, consider purchasing visitor passes. A New York Metro Card is the easiest and fastest way to get anywhere by subway. Simply purchase at any subway station then swipe and go. Hop On Hop Off buses are also a great way to sightsee and commute around the city. And a New York Pass will give you access to over 90 top attractions in New York City. Check these out at: www.newyorkpass.com/

Main picture: Subway entrance to 42nd Street in the heart of Times Square 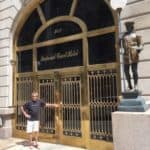 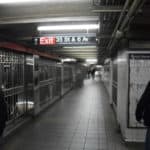 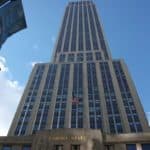 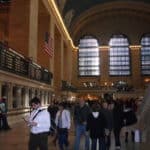 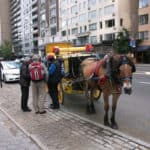 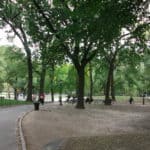 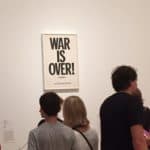 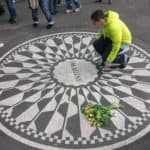 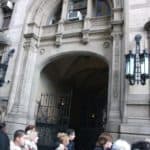 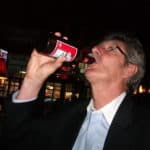 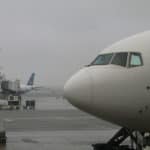