Heading home on the ship’s tender you can see how big the Celebrity Solstice is.

Eighteen sun-soaked days, eighteen fun-filled nights cruising the Pacific Ocean on one of the most beautiful ships afloat. This was our return trip from Hawaii to Australia.

Cruising is one of the fastest growing and most popular forms of luxury holiday travel. Industry figures indicate that passenger numbers will reach 537,000 (that’s over half a million!) in 2018, with over 314 cruise ships continuously transversing the world’s great oceans. Our cruise ship, the Celebrity Solstice, is one of Celebrity Line’s fleet of ultra modern luxury cruise liners. The distinguishing feature of the Celebrity Solstice, and an indicator of the ship’s size, is the half acre of real grass on the top deck, giving this deck a ‘country club’ ambience. Solstice, like all Celebrity Line ships, is fitted out to the highest standard, with stunning venues and amenities designed by some of the world’s most famous architects and interior designers. This is very definitely where you can discover a floating world of modern luxury. You are one of 2,850 passengers but you are treated like you are the only person on board. Solstice Class cabin choice includes suites, staterooms and family staterooms, with and without balconies. Having cruised before, for this trip we chose a stateroom with a balcony. The balcony increases your living space considerably, allowing you to open to door to your own private deck to let in the light and enjoy the fresh ocean air. If you do decide to invest the extra in a balcony stateroom, do your research. Check the ship’s floor plans and ask your travel agent to be sure that the view from the balcony of your cabin is not impeded in any way by, for instance, lifeboat gantries. With or without balconies, the staterooms on the Celebrity Solstice are spacious and extremely well presented.

Our 18 night cruise saw us transversing the Pacific Ocean east to west, from Honolulu in Hawaii to Sydney in Australia. You can if you wish choose to cruise west to east, Sydney to Honolulu. On this cruise you really do develop an appreciation of just how immense the Pacific Ocean is. Of the 18 days on board, 8 are in ports of call and 10 are at sea, the longest time at sea being 5 days between Maui in Hawaii and Bora Bora in French Polynesia. Our cruise saw us departing Honolulu, overnight to Maui. From Maui to Bora Bora, Moorea and Papeete in French Polynesia, then across the International Date Line (celebrated by the traditional King Neptune on-deck festivities), to Auckland in New Zealand. From Auckland, overnight to the Bay of Islands on New Zealand’s North Island, then the final leg into Sydney.

The cruise offers an excellent combination of days at sea and day in port. At sea, there is never a dull moment lazing on the docks in the sun, swimming in the pools, being entertained in the evenings by some of the world’s best entertainment and celebrity shows, catching up with new friends at one of the numerous bars and lounges and of course, enjoying 5 star dining in the evenings in the Main Dining Room, with complimentary access to the adjacent Luminae Restaurant. You can also pre-book your choice of beverage packages and pay one set price for your beverages. This is a great idea as no money changes hands on board. All transactions are recorded on your personal passenger card. So, no nasty surprises when it comes to finalising you account when disembarking!

The visual style and ambience of the Celebrity Solstice is amazing. Your first impression upon boarding will be just how luxuriously appointed the ship is and how big it actually is. The central atrium features a bank of glass elevators that transport passengers to the 12 levels of the ship. The layout of the ship is equally amazing, with everything you need easily accessible. There is even a shopping arcade, with shops and boutiques selling luxury gifts and souvenirs.

Sailing from Honolulu on Oahu, our overnight cruise  arriving at our first port of call, the close-by Hawaiian island of Maui early in the morning. Unlike Oahu and Honolulu, Maui is far more laid-back and more my idea of a Hawaiian island. It is obviously a lot of people’s idea of a traditional Hawaiian island, as it is extremely popular with visitors and holiday-makers. We checked out the local markets and the quite extensive shopping precinct and some great coffee shops. Now anyone who has visited the US recognises that although the country is the home to Starbucks, they don’t always make the best coffee. We stumbled upon a French-influenced coffee shop on Maui that served the best coffee we had enjoyed in a month. Definitely a highlight of our day ashore! But seriously, this is a lovely island and visiting it, if only briefly, confirmed that one day we will return for a longer stay.

Bora Bora was our next port of call. What a fascinating island. This small South Pacific island northwest of Tahiti is part of French Polynesia. Surrounded by sandy islands and a turquoise lagoon protected by a coral reef, it is the ideal safe anchorage for ships, including our Celebrity Solstice. Overwater bungalows and underwater adventures welcomed us to the island, as did the locals where the French influence is clearly seen in language and in customs. The island is small enough to tour around in a day. You can organise tours at the Travel Desk on board the ship, or take a taxi onshore. The scenery is spectacular and the island is regarded as one of the few places on earth that everyone one hopes to witness in their lifetime.

From Bora Bora we cruised to Moorea and on to Papeete in Tahiti and the Port de Papeete. Papeete is the capital of French Polynesia. Beyond its natural beauty of the landscape as captured by the famous impressionist painter Paul Gauguin, Tahiti and Papeete is famous for its pearls. We visited the Robert Wan Pearl Museum, the world’s only museum dedicated to pearls. Strolling down the Boulevard Pomare that hugs the harbour, you can explore the many local business selling Tahitian artefacts and souvenirs as well as visit the pearl retailers and the centrally located Tahiti Pearl Market. The main thoroughfares of Rue du Marechal Foch and Rue du General dev Gaule honour great French military and political  events and are home to some of the very best Polynesian eateries you will find anywhere. In Rue du Marechal Foch you’ll find excellent restaurants including Le Sully, Les 3 Filous, Le Soufffle and Le Grillardin where you can enjoy the best of the local cuisine. A great way to spend a day in the Pacific and, no doubt more than a few French Pacific Francs, also know as Poynesian Francs.

Reluctantly saying “aloha”, or farewell to French Polynesia, we embarked upon our 4 day cruise to New Zealand and the beautiful harbour city of Auckland. Based around 2 large harbours, Auckland is the major city of the North Island of New Zealand. Disembarking at the dock, we had the day to explore the city. In the centre of the city is the iconic Sky Tower with views of Viaduct Harbour which is full of super yachts and lined with bars and cafes. Auckland’s Domain, the city’s oldest park, is based around an extinct volcano and home to the formal Wintergardens. Auckland is a great place to stretch your sea legs and explore the shops, restaurants and parks. Its also a great place to start your engagement with the indigenous Maori culture. From Auckland we sailed on to the Bay of Islands on the north coast of the North Island. We arrived off the coastal town of Paihia and were ferried ashore to Waitangi Pier to explore the town. This area is extremely significant as it is the location of the Waiting Treaty Grounds where the Treaty of Waitangi was signed in 1840 by representatives of the British Crown and Maori Chiefs from the North Island acknowledging land ownership and giving the Maori the rights of British subjects. The Bay of Islands is a very beautiful place and we made a mental note – return here for a holiday.

Back to our home and sea and our final two days on the magnificent Celebrity Solstice. What a fantastic trip and yes, the romance of cruising. It sure beats the tedium of flying! Love the boat? just maybe the Celebrity Solstice is actually ‘the Love Boat’!

And on the 18th morning…

We sailed through the Heads in one of the most magnificent natural harbours in the world, Sydney Harbour. After over 4 weeks away and a fabulous Pacific adventure, it was great to be home. Sydney Harbour must surely be one of the great natural wonders of the world, and nothing beats sailing in through the Heads at sunrise past the Sydney Opera House to  be greeted by the skyline of the city. As with everything on the Celebrity Solstice, disembarkation was very well organised and within 1 hour of docking, we were on the pier to be met by our son James and his partner, Shelby. We were home.

Book early or book late? Booking your cruise early ensures you that you will get the cabin you want. Cruising is extremely popular so the best cabins tend to go fast. Booking late may means that you could get a discounted deal on your cruise. Cruise liners want to fill cabins, so checking out the various cruise websites for bargains closer to departure dates may save you money. We also find that as regular cruisers, we ‘mysteriously’ end up on a plethora of cruise lines’ email lists, all offering discounted deals. If you have flexibility in when you can cruise, these offers can be real money savers.

We talked about drinks packages. They are not for everyone so, if you are are only a moderate drinker, it may be better and cheaper to simply pay as you go. Do the math and don’t be talked into purchasing something you really don’t need.

Finally, cruising means that you don’t have to travel light. There are little or no restrictions on baggage. So bring what you want to wear. Many cruise lines require that you dress formally for dinner – no board-shorts or thongs! For men a suit, business shirt and tie. For women, and evening dress is appropriate. The other nice thing about cruising is that when you embark, your luggage is delivered directly to your cabin. You unpack and hang everything in your wardrobe. At the end of the cruise, you pack and your luggage is collected to be claimed when you disembark. Easy.

Main picture: The majestic Celebrity Solstice at anchor off Maui in Hawaii 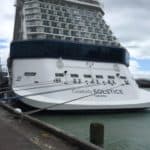 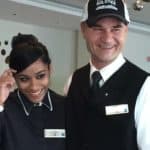 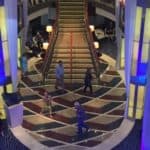 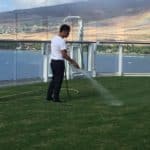 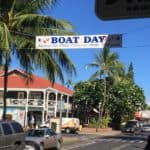 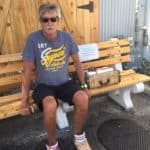 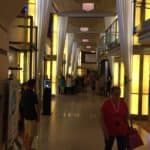 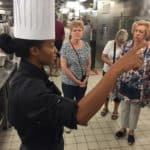 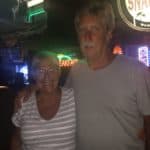 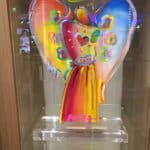 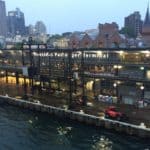