And the winner is

An unexpected 24 hours in the city of bright stars and gold statues.

My cell phone buzzed. It was a text message from Delta Airlines informing me that our late afternoon flight from New York’s JFK Airport to Los Angeles LAX, connecting with Virgin Airlines to Australia would be delayed due to a severe storm front approaching New York. The storm was expected to cause disruption to airline arrivals and departures and our flight was likely to be delayed by some hours.

Eventually, we did get away from JFK three hours behind schedule. It was soon apparent that we and another seven passengers on the Delta flight would miss our Virgin Australia connection from LA to Australia. The Captain radioed ahead to let LAX and Virgin know. We arrived 3 hours after our Virgin flight had departed. We were met by a Delta representative at an almost deserted Los Angeles International Airport. We were informed that the airline would accommodate us at no charge and that we had been rebooked on our flight the following evening. We were then bussed to a hotel on the outskirts of LA Airport for an unscheduled 24 hour layover.

You hear horror stories about passengers being caught at airports due to flight delays and cancellations and having to sleep on terminal floors. I have to say that the service we received from Delta Airlines was absolutely first-class. We were each provided with a travel pack of ‘essentials’, while our luggage was held in transit for the following evening’s flight. The Crowne Plaza Hotel was excellent, and after a great night’s sleep we awoke to a hearty breakfast. We and our seven fellow Brisbane-bound passengers decided that, as we were in LA for the day we would take a tour of Los Angeles. Dinah and I had transited through Los Angeles Airport on our way to New York and back on a number of occasions but had never actually had the opportunity to visit LA so, as it turned out, we were the winners – an opportunity, albeit unexpected, to see a little of this city of stars and statues.

Promptly after breakfast, a mini-bus collected all nine of us from the hotel and we set off for our day tour of Los Angeles. First stop was Venice Beach, a 20-minute drive from LAX on Lincoln Boulevard. On the way we passed Marina Beach and the famous Marina Del Rey. The marina is the largest man-made waterway in the United States and a major boating and water recreation destination. It is also an up-market residential location for many of LA’s sun-loving rich and famous. Coming from the Sunshine Coast in Australia, we were familiar with marina and residential canal developments. From Marina Del Rey, a short drive to the world-famous Venice Beach. We’d heard a lot about Venice Beach, Indeed one of our sons met his bride-to-be here. Reflecting on similar locations in Australia, we felt that there was a lot of Byron Bay about Venice Beach; a bohemian mix of the 1960s and today. Hemp clothing shops mingling with up-market boutiques, foodie hotspots and coffee bars on the free-spirited and mural-adorned Venice Boardwalk. On the beach itself, swaying palms and a huge skate park and Muscle Beach outdoor gym. Strolling along the boardwalk is quite an experience as you are constantly being passed by bikini-clad girls on roller skates (you remember roller skates!) eating ice creams, and muscle-bound men parading their physiques. Back on the bus and off to our next stop.

In Australia, we call them jetties. In the US, they are called piers, and the Santa Monica Pier is arguably the most famous of them all. The pier is a large double-jointed landmark structure with an iconic entrance that has made it a favourite destination for locals and tourists for over 100 years. Open all year round, activities at the pier include an amusement park with carousel and roller-coaster, restaurants, bars and souvenir shops, as well as the Santa Monica Pier Aquarium. It is also an iconic surfing location and one of the early 1960s legendary surf breaks. Sunset here is also pretty spectacular, though unfortunately our tour schedule did not allow us to stay for this.

Lunch at the Farmers Market

A Los Angeles landmark since 1934, the historic Grove Farmers Market is a must-visit tourist attraction – particularly around lunch or dinner time. There is plenty to see and do here, with dozens of restaurants and eateries varying in price from reasonable to expensive. It’s a great place for children, a carnival atmosphere with tramcar rides through the streets and water fountains to marvel at. There are also myriad shops selling local produce and goods as well as tourist-orientated products. We settled for a pizza with an unbelievably rich cheese topping and a Bud (Budweiser Beer) to wash it down. Then back on the bus for the afternoon segment of our tour.

Where the Stars come out

When I think of Los Angeles, I think of the Hollywood sign, Rodeo Drive, Beverley Hills (and the Beverley Hillbillies!) and the stars on Hollywood Boulevard. Unfortunately, time did not allow us to venture in to the hallowed streets of Beverley Hills (next time!), but we did travel down Rodeo Drive, marvelling at the big brand shops and the Porsches parked along the kerb-side.  There’s money here, you can just tell! Our mini bus parked on a side street off Hollywood Boulevard and we alighted to explore this iconic street and its famous footpath, with the star’s stars celebrating the hey-days of Hollywood in the 1920s right through to today. We strolled past souvenir shops selling stuff you just have to buy when you visit LA, but wonder why you wasted your money when you get them home. This is the home of the Oscars and the famous Grauman’s Chinese Theatre. Here to is one of the best vantage points to see the famous Hollywood sign from the observation deck atop an adjacent Hollywood & Highland Centre Mall. The original sign erected on Mount Lee in 1923 to promote a real estate development read “Hollywoodland”. After falling into disrepair, in 1978 it was resurrected and the last four letters removed to simply read “Hollywood”.

The good oil on LA

The trip from Hollywood Boulevarde through Central LA, Chinatown, Downtown LA and South Los Angeles took us about one hour. What most visitors may not realise, and we certainly didn’t, is that Los Angeles was once a significant producer of oil from fields that are located right in the heart of the city. In fact, Los Angeles and the Los Angeles Basin were the largest oil producing fields in California. Today, only one oil well remains on South Mountain View Avenue, but throughout Los Angeles the pumpjacks, also called “nodding donkeys” because of their characteristic shape and motion, still dot the landscape.

We arrived back at our hotel about 4.30pm, in time to get ready to head off to the airport to catch our 23.00 Virgin Australia flight home. Thanks to Delta Airlines, what had started off looking like a bit of a disaster, a forced layover in Los Angeles, actually turned out to be a great experience and an opportunity to see a city that we otherwise would not have had.

Delayed or even cancelled flights are becoming more and more common, so if you are travelling internationally with checked luggage and carry on, consider including essential personal items in your carry-on. This just might get you out of trouble if you do find yourself spending extended time at an airport or, as in our case, overnight in a transiting city.

There are any number of tours of Los Angeles available, including tours to specific locations. And there are night tours. For comprehensive all-of-Los Angeles tours, check out: www.losangelesusatours.com/or www.lainsidertours.com/PrivateTours/LosAngelesCA

For specific Hollywood tours, a site that may be worth checking is: www.hollywoodcitytours.com/

Main picture: Two gold statues that have come to symbolise LA and Hollywood 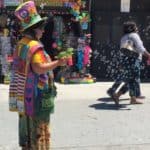 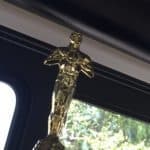 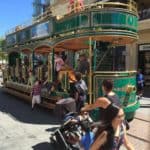 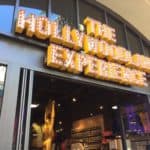 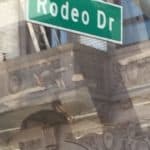 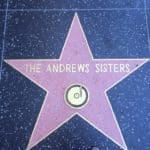 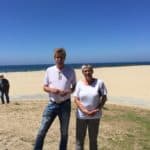