Far Away In Time

All eyes turn towards the west as sunset heralds the end of another Bali day.

Call it a sign, but as Dinah and I were having breakfast at Brisbane International Airport prior to boarding our flight to Bali, the 1980s hit song ‘Echo Beach’ by Canadian band Martha and the Muffins was playing on the video screen in the restaurant. Less than one week later here we are at Echo Beach in Bali. Coincidence? I am not so sure.

OK, so it’s not the Echo Beach immortalised in the song by Martha and the Muffins on their 1980 album Metro Music. In fact, the Echo Beach referred to in the lyrics of the hit song never actually existed. It was all in the imagination of songwriter and member of the Muffins, Mark Gane, and was a symbolic notion of where the songwriter would rather be, somewhere far away in time. Employed at that time as a wallpaper printer, Gane found his work rather dull and his mind often drifted off to times he would like to live over again.

Back to reality and to Echo Beach in Bali, about 3.5 hours south-west of where we were staying on the Amed Coast. Also known by its Balinese name of Pantai Batu Mejan after a significant Balinese Hindu sea temple on the site, Echo Beach is located in the region of Canggu on the west coast of the island, about 35 kilometres northwest of Kuta and Seminyak and about 15 kilometres west of the provincial capital of Denpasar. It is 45 minutes by taxi from Ngurah Rai International Airport.

On Echo Beach perfect waves and stunning sunsets collide with 21 century Balinese beach culture. Considered to be one of the best beach breaks in Bali, this is a surfer’s paradise due mainly to its reef breaks and 2 metre-average waves which are great for beginners and pros alike. The Canggu area is a major rice producing district, with ancient rice paddies sweeping down to the coast managed by the local Balinese villagers. Shiny new buildings and fancy boutiques sit side by side with the lush green rice paddies and local warungs. Echo Beach is at the end of Jalan Pantai Batu Mejan, the road named after the temple that is located here.

Make no mistake, this is a surfing town with surf board hire and cheap eats kiosks lining the black sand beach foreshore, catering for the hundreds of surfers who undertake the pilgrimage to this fabled spot. While most are open during the day, many more come to life in the evening with Balinese barbeques and buffets at sunset.  Two of our favourite places to eat are Aksata Beach Restro and Bar and Cabe Bali. Located about half way along the covered foreshore walkway, Aksata Beach is a great spot for lunch. Simple food and great prices, you can eat and enjoy the beach views. At sunset, Cabe Bali at the southern end of the beach is a great place to find a table, order a Bintang (or two) and watch the sun go down over the ocean, with surfers catching their last waves of the day. Food here is excellent and like all of Bali, incredibly well priced.

Speaking of sunsets, this is what Echo Beach and the west coast of Bali is really famous for. The ‘show’ starts at dusk, around 5.45pm and culminates with the sun setting around 6.45pm. The sight is simply spectacular. Hundreds upon hundreds of people with iPhone pointing west crowd the beach; many lounging in bean bags or on beach beds, others perched on stools at one of the many beachside bars, all gathered to watch the spectacle – sun worshipers paying homage to a ritual of nature that truly is far away in time. Dinah and I have travelled a lot of the world. We think that the sunsets over the ocean at Echo Beach are among the best we’ve ever seen.

The main street of Echo Beach is Pantai Batu Bolong. Here you’ll find numerous fashion boutiques, street-side restaurants and eateries and surf shops selling a huge range of surf boards and accessories as well as surf fashion. Here also, street stalls selling local Balinese items and, of course, ‘knock-off’ branded apparel. Great spot to pick up a Deus t-shirt or singlet for around 70,000 IDR. Further up the street there a number of ‘quickie-marts’ where you can stock up on grocery essentials, including beer and some spirits. There is also a Guardian pharmacy here. Here also you’ll find a Balinese market selling craft goods and local apparel. As with the street stalls, bargain hard. It’s all part of the game. I usually start at one third of the asking price and go from there. You’ll soon know if they are serious about selling.

There are numerous resorts, villa complexes and bungalows in Echo Beach and in the broader Canggu area. Prices here are significantly less that in southern Bali in traditional areas such as Seminyak and Sanur. Wherever you choose to stay, make sure that it is air-conditioned, has a fridge in the room (to keep your drinks cold), a pool and is within easy walking distance to the beach. It gets very hot here.

We stayed at Easy Surf Villa which is located in a gated community of up-market villas just north of the centre of Canggu. It is an easy and flat 3 minute walk to Echo Beach. This place is fantastic. Secure behind tall wooden doors and off a quiet paved lane lies a veritable oasis. We had our own private bungalow with bathroom, right on the edge of the sparkling pool. There is a communal kitchen where you can prepare your own meals if you wish, with breakfast of fresh fruit, eggs, pancakes, toast and coffee prepared for you each morning between 7.00 and 11.00am for just 30,000 IIDR per person – that’s AUD$3 per person. With just 5 rooms plus bungalow, you’ll never feel crowded. We would absolutely recommend staying here. Excellent accommodation, friendly staff and super convenient to the beach.

We confined our stay mainly to Echo Beach, only venturing to Canggu village once. Canggu and Canggu Beach is a coastal village in the up and coming resort area between Seminyak and Tanah Lot. The coastline is similar to other places in Bali, with black sand and some excellent surf breaks. The countryside is predominantly verdant rice paddies. More recently Canggu has become a residential area of choice for Bali expats with luxury homes and villa complexes springing up everywhere alongside 5-star holiday resort hotels and high-end brand name shops and restaurants. Yep, the money has arrived and so has rock and roll. You know that western decadence has arrived in this once pristine rural environment when they open a Hard Rock Hotel complete with music memorabilia-themed suites. Rock on!

It’s time to continue our Bali odyssey. A taxi ride to southern Bali and to our first destination, Seminyak the so-called ‘capital of glitz’. Let’s see if we can discover some culture in amongst all that glitz!

Not all of Bali’s beaches are surfing beaches. The west coast offers the best surf breaks at destinations such as Echo Beach, Padang Padang and Ulawatu in the south. There are also reasonably good beach breaks on the more open beaches of Kuta and Seminyak. The calm waters of Jimbaran and Sanur are better suited to other forms of water sport such as SUP, while the peaceful beaches of the Amed Coast on the mid-east coast of the island are great for diving. Check before you load up your board.

Check also the cost of transporting your board to Bali. Most beaches have surfboards and other water craft for hire, so if you are more of a casual surfer, hiring a board may be a more economical option.

Main picture: Crowds gather every evening on Echo Beach to watch the sun go down. 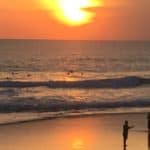 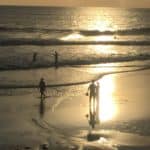 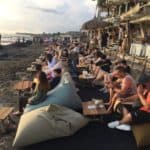 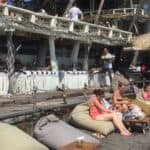 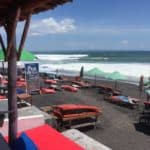 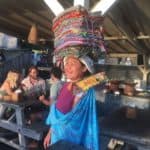 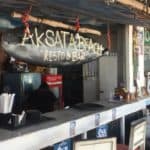 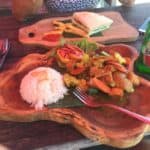 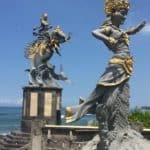 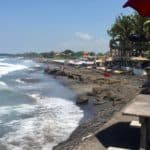 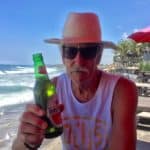