A Bird’s Eye View Of The GC

As we discovered, not all of the Gold Coast’s wildlife is confined to Surfers Paradise!

Australia’s Gold Coast has a reputation for many things – beautiful beaches, great surf breaks, an amazing high-rise skyline, bikini-clad metre maids and of course, the famous wildlife and nightlife that reigns supreme in the GC’s party central, Surfers Paradise.

But there’s another form of wildlife that inhabits the Gold Coast. One far less raucous. A more traditional one – the amazing animals; the birds and reptiles that can be found in the myriad natural parks and forested areas of this 60 kilometre stretch of world-famous coastline.

As the glorious South East Queensland spring weather descended upon us, Dinah and I decided to take the caravan back to Burleigh Heads on the Gold Coast for a week. We were leaving for Bali for a month at the end of October, so a week on the GC seemed the ideal pre-curser to our Indonesian trip. We’d been to Burleigh Beach Tourist Park earlier in the year and had really enjoyed it. This is a great caravan park with excellent amenities and it is close to everything – beaches, restaurants, coffee shops and Coast fashion outlets. It is also ideally situated centrally on the Gold Coast making access to Surfers Paradise in the north and Coolangatta in the south very easy. If you are planning a caravan visit to the Gold Coast, the park is definitely worth checking out: www.goldcoasttouristparks.com.au

Our introduction to the local wildlife started as we began to reverse the caravan onto our site. The park’s caretaker approached us to warn us that we needed to proceed with extra caution as a pair of Bush-Stone Curlews had established a nest right behind where we would park the caravan. In fact, so close to the adjoining caravan site that the wildlife people had instructed the park that that particular site could not be used until the Curlews had finished nesting. Considering the park’s usual tariff rate, that’s a $50-a-night nest – a $350 a week family of birds!

We managed to nudge the caravan onto our designated site oh-so carefully so as not to disturb ‘mum’ sitting on the nest. She wasn’t happy, hissing at us, but amazingly over the week she settled down as we became more familiar to her and her male partner who was always close at hand to share the nesting duties. The hissing stopped but she never took her eyes off us.

The eyes have it!

Speaking of eyes, as we alighted from the Jeep to disconnect the caravan, the first thing we saw were two huge beady Curlew eyes staring us down. One of the most distinctive features of the Curlew is their eyes. They are huge. Round and clear. They seem to look right though you. Named the Bush-Stone Curlew because of their somewhat drab motley brown stone-like camouflage plumage, these birds are quite common in southern Queensland and northern New South Wales, frequenting the scrubby bushlands common on the coast.

Now this is a bird with history. In many Aboriginal cultures Bush-Stone Curlews have close associations with death. According to aboriginal legend, the Bush-Stone Curlew is a harbinger of death. Legend has it that young Aboriginal people, feeling helpless, began to tell each other to follow their Aboriginal ancestors and kill themselves like Purrukapali. But the real story says something else. The true story was about creation, how our first man died to create the Curlew, from the spirit of our first woman, his wife, and how the moon was created  from the spirit of Purrukapali’s treacherous brother. This was the real story.

The Bush-Stone Curlew, or burhinus grallarius is found across Australia, apart from the drier parts of western Australia and the Simpson Desert. Once common in the settled and agricultural regions its presence there has been reduced by land clearing and modern land management practices. Like many Australian birds it has been given a number of names including Weelo and Willaroo, a derivation of the bird’s distinctive call which has been likened to the call of a screaming woman or baby. Their screeching can lead to a very unsettled night in the bush for the uninitiated if a mob of these birds set their minds to it!

Now you see them, now you don’t.

Bush-Stone Curlews are active mainly at night and are more often heard than seen. They have a cryptic plumage and when they are hunched close to the ground they are very hard to see as they blend into the leaf and ground litter that is their preferred roost and nesting habitat. Even though our pair of Curlews had located their nest in the relative open, as my photos show, they were still amazingly camouflaged even in the open ground. Our pair were sitting on an egg, one motley grey egg. No nest, simply roosting down over the egg to keep it warm. They do this for about 4 weeks (27 to 29 days), taking it in turns, male and female to sit on the egg. Three hour shifts – rain, hail or shine. From hatching to fledging is about 32 to 38 days. If the nest fails because the chicks are lost, a pair of curlews will not make a second attempt to nest.

As it turned out, we had two of these three weather types during our week at Burleigh Heads. Mostly sunshine, but two days of torrential, but much needed rain. To avoid cabin (or caravan) fever, we met a school friend of Dinah’s for lunch. With her husband, the four of us enjoyed a magnificent meal at the Pavilion Restaurant on Burleigh Beach. This is terrific spot for lunch and dinner, great food right on the beach with spectacular sand and surf views. It is also right across the road from our caravan park. Bookings are essential, with crowds forming outside the restaurant well before its midday opening. For more information and reservations, go to: www.burleighpavilion.com

One of the other great things to do at Burleigh is take a walk around Burleigh Headland through the national park to Tallebudgera on the southern side of the headland. This is a beautiful 1.5 kilometre leisurely stroll along some amazing coastline. You can return through the park or take the full circuit walk back along the bush track that hugs the highway. As you emerge from the park onto the highway you’ll find the Jellurgal Aboriginal Cultural Centre. Here you can learn a little more about the rich indigenous history of this area and ‘feel’ the legend of Jellurgal. You can also learn about the fauna and flora of the area and how the first people lived in harmony with Australia’s unique wildlife, of which the Stone-Bush Curlew is an ancient member. An absolutely essential destination, check the Jellurgal Cultural Centre out at: www.jellurgal.com.au

What a great week and what a different perspective of the Gold Coast. We arrived to hissing and the flapping of wings. We left having made friends with a pair of Stone-Bush Curlews and with a bird’s eye view of the GC and a real insight into a unique native species that has learned to co-exist with us. We are only sorry we could not stay longer to witness the hatching of that one precious egg.

Main picture: Stone-Bush Curley on the nest – up close and personal 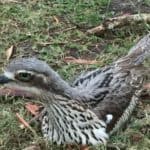 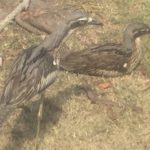 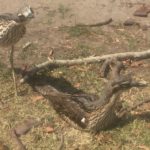 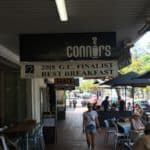 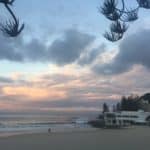 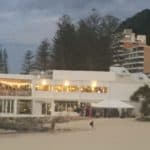 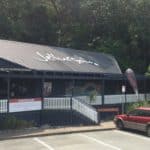 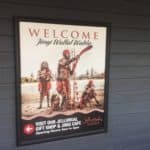