As a traveller and travel writer, with my wife Dinah I have visited Bali, the ‘Island of the Gods’ on a number of occasions and have grown to love the Balinese people and the customs and culture of this beautiful place. From the tourist meccas of Kuta, Seminyak and Nusa Dua in southern Bali, the relaxed environment of Sanur, to the remote and natural beauty of the island’s north and north-west, this is a truly magical place, one steeped in tradition and the home of some of the friendliest people on earth. If there is a paradise on earth, surely the Island of the Gods is it.

An ancient art from the Island of the Gods.

Dinah and I love bonsai. We also love Bali so it just seems natural that we combine these two great loves in a book on Balinese Bonsai. Hence, our most recent sojourn to Bali.

Bonsai is an ancient art that dates back thousands of years. A popular misconception is that bonsai originated in Japan. In fact its origins were in China as far back as 1000 BC from where it eventually did spread eastward to Korea and then Japan. The art of bonsai was first propagated in China by Buddhist monks who wanted to bring the outdoors into their temples. Hence, the presence even today of bonsai in buildings and outdoor areas of religious celebration and worship in China, as well as in other parts of Asia, including Bali.

There is a gentleness to the Balinese people that belays their deep cultural heritage and belief systems. This is reflected in their approach to bonsai, which is markedly different to that found in the traditional bonsai domains of Japan and China or even in the West. The species of trees too are different to those found in other parts of the world. One example is the kayu shakti (power wood), an ancient tree that is thought to have spiritual powers that can neutralise negative energy and protect the home. These trees are highly sought-after throughout Indonesia and are now protected by the government.

A Masterclass in Bali Bonsai

While in Bali researching the book, Dinah and I were privileged to meet and spend some time with Dewa JJ at his Bali Akah Bonsai nursery in the village of Klungkung near Semmarapura. Dewa JJ, or simply JJ, is a renowned Balinese bonsai master and his village and nursery gardens are approximately 1.5 hour’s drive north from Sanur on the east coast. A tiny regional capital, Semarapura was once the centre of Bali’s most important kingdom and is still commonly called by its old name, Klungkung.

Dewa JJ’s passion for bonsai began in 1985 when he started his search in the wilderness of Southern Bali for trees suitable to be transformed into bonsai. He scaled the formidable cliffs of Uluwata and Nusa Dua in search of ancient and rare kayu shakti (power wood) trees before they became extinct. What started as a weekend hobby became his obsession. In 2015, JJ opened Bali Akah Bonsai in the Akah village of Klungkung where he now shares his passion for and knowledge of bonsai with all those eager to learn. In his own words his goal is “To offer people striking bonsais that will bring beauty to their homes and to their lives.”

This is a picturesque part of Bali and the perfect location for Bali’s foremost bonsai gardens. Bali Akah Bonsai is a truly beautiful environment where you can meander amongst dozens of spectacular bonsai trees, a place where you can look and a place where you can learn. JJ is a wonderful teacher, passionate about the art of bonsai and happy to spend time with his visitors explaining his trees and the processes he uses. You can even undertake bonsai classes here, with Introductory, Intermediate and Advanced Intensives available. We spent a day with JJ at Bali Akah Bonsai. It was both informative and inspirational. Dinah enrolled in an Intermediate class to learn first-hand from the master some of the finer points to defoliating bonsai prior to repotting as well as advanced wiring techniques for larger trees. I watched on as Dinah and JJ worked on two of his large Tamarind and Ficus trees, taking notes and photos. Dinah claims that she learned more about wiring in that day that she had in years of listening to and watching others at home.

If you are involved in bonsai or simply have an interest in the art, then a visit to Bali Akah Bonsai is a must. It’s an easy day trip from centres such as Kuta, Sanur, Nusa Dua and Seminyak. To arrange a time to visit Dewa JJ at Bali Akah Bonsai to view his trees and to enrol in a bonsai class, go to: https://www.baliakahbonsai.com

Our time in Bali coincided with the 2019 Indonesian National Bonsai Show, Kontes Bonsai Nasional in Badung. This, the largest bonsai show in the region was held at the Regional Government Buildings in Denpasar and featured a display of over 350 trees features trees from many of South East Asia’s leading bonsai exponents. Most of the participants came from Bali and Java to compete for the Regent’s Trophy.

There were also dozens of really excellent bonsai for sale, from ‘starter trees’ to large advanced trees. Unfortunately, some countries including Australia restrict the import of flora into the country, so purchasing bonsai trees in Bali can be problematic. However, for Dinah and I as Australians it cost us nothing to look, photograph…and dream!

There is an excellent YouTube video on the 2019 Show that captures the magnitude of the show and the magnificence of the trees on display in far more detail than I can in this story. To watch the video, open YouTube and search: Indonesian National Bonsai Show 2019 Badung, Bali

It has been said that bonsai is not a race, nor is it a destination. It is a never-ending journey. If you are interested in bonsai look for my book Balinese Bonsai: An Ancient Art from the Island of the Gods when it’s published in early 2020. I hope that it will provide you with both an appreciation of bonsai in general as well as insights into how to grow and enjoy the unique combination of nature and art that is Bali Bonsai. 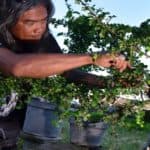 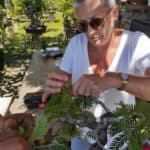 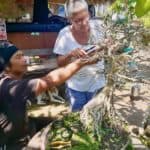 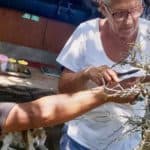 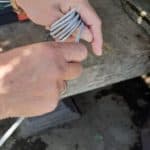 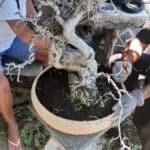 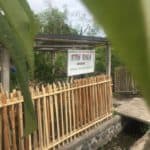 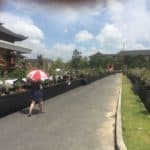 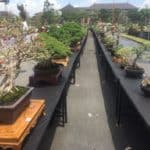 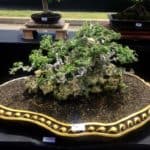 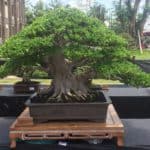 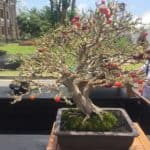 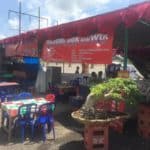