Tuk Tuks are definitely the most affordable and fun way to explore Phnom Penh.

Each year, hundreds of thousands of tourists from around the world visit South East Asia. Countries including Vietnam, Cambodia, Malaysia, Laos and Thailand are the new go-to destinations for those of us looking for a cultural adventure at the budget price. Accommodation, food, alcohol and almost every conceivable consumer product is significantly cheaper in SE Asia. And the people are welcoming and friendly, the scenery is unbelievably beautiful and the weather is warm (and in the rainy season, very wet!).

For Dinah and I, travelling to Cambodia for a short holiday was an adventure we had looked forward to for some time, for while we had spent considerable time in the neighbouring countries including Vietnam, Malaysia and Singapore, we had never been to this country.

Set a budget. And stick to it.

While SE Asia is generally regarded as an inexpensive destination, setting a realistic budget is important. So is sticking to it. Our destination out of Brisbane was Cambodia’s capital city, Phnom Penh. Flying Singapore Airlines means that you invariably have to transit in Singapore at Changi Airport. Like most airports, everything is expensive. Our stop-over was 6 hours and while Changi Airport is undoubtedly the finest airport in the world, 6 hours is a lot of time to kill. So  we headed for the bar, Charlie’s Bar. A bottle of Tiger Beer and a glass of Sauvignon Blanc was US$30! We’d set ourselves a budget of US$40 a day and within the first 2 hours of our first day we had blown 75% of it on one round of drinks! We should have known better but it had been a long flight and it was going to be a long lay-over. Mental note – avoid airport bars!

Our flight from Singapore to Phnom Penh was a little under 2 hours. Our hotel in Phnom Penh, the Rose Emerald had arranged for us to be met at the airport. The pre-negotiated fare from the airport to the hotel was US$13. It is really worthwhile to organise an airport pick-up, particularly after a long flight. The last thing one needs to do is fight off a hungry mob of local cab drivers as you exit the Arrivals Terminal.

The Rose Emerald is a nice hotel, centrally located in the capital and close to many of the city’s major attractions, including the Royal Palace (or the ‘Pink Palace’ as it is commonly referred to), major monuments and shopping malls. It is also walking distance to Phase Thmey, the Central Markets – a bargain hunter’s paradise for local merchandise, an amazing array of local foods and of course, all those knock-off brands. Be prepared to haggle. It is expected.

An interesting thing about Phnom Penh is that all of the streets other than the major boulevards are identified by a number rather than a name. It makes getting around easier, particularly for tourists. The Rose Emerald Hotel is on Street 232 (corner 115) and is surrounded by cheap eateries (if you are OK with the more exotic Cambodian food) averaging US$5 a dish and bars selling the local Ankor Beer at US$1. As in any foreign country, be careful what you eat. Food hygiene standards are not what they are in western countries or even in many other Asian countries. At around US$35 a night for a Superior Double Room, the Rose Emerald is a good value, convenient choice. It is clean, relatively modern and well located and offers a complimentary breakfast. (you won’t see the complimentary terry towelling slippers you see elsewhere but instead a pair of rubber thongs – albeit size 12)

It is a left hand drive country so if you are from Australia, New Zealand or the UK, watch when you cross. As is common in SE Asia, the traffic is manic with thousands of small motor bikes, scooters and Tuk Tuks (the local scooter-based taxi cab). Generally drivers are courteous, particularly as footpaths are largely non-existent, being used for parking. Hence, be vigilant with what you carry with you.

The official currency of Cambodia is the Riel but American dollars are universally accepted. Be aware that when you pay in American dollars you will most likely get the change in Riel. So try to pay the exact amount in US dollars to avoid getting Riel that are difficult to get rid of

Phnom Penh is a rather polluted city, certainly by western standards. So, look after your health. watch what you eat and, if in doubt, don’t eat it. If you suffer  from asthma or other breathing difficulties, make sure that you take all your medications. There is very little English spoken in Phnom Penh so communicating in any sort of a medical emergency will be problematic.

Entry is a bit of a grey area.

You will need a visa to enter Cambodia. You can get one when you arrive, but the easiest and most convenient way is to get an e-visa online before you travel. Be careful when you go online as there are any number of websites offering to organise your visa. Some look a little dodgy and the last thing you need is to be arguing with an immigration officer upon your arrival.

We went to the Cambodian Ministry of Foreign Affairs and International Cooperation website at https://www.evisa.gov.kh and applied online. You will need to supply a scanned passport photo with your application. You get instant confirmation of your application and generally within 48 hours your visa will be emailed to you. The cost for us was US$49.50 per person. You then present a colour printout of your e-visa with your passport when you enter Cambodia. Print out a second copy for exiting Cambodia.

Because of other commitments, we could only manage a short stay in Cambodia so we didn’t get much of a chance to explore beyond the city to places such as Siem Reap and Angkor Wat in northern Cambodia (next time!). We did however have an opportunity to visit the infamous Khmer Rouge Killing Fields and S21 prison just outside Phnom Penh. This is the subject of a separate blog post.

Make sure you always have travel insurance when your travel, particularly overseas and particularly to countries where medical facilities may not be considered to be as good as they are at home. Hospitals and medical support are very expensive in some countries and it is not uncommon to hear stories of travellers being tens of thousands of dollars out of pocket due to unexpected medical emergencies and expenses. Or even worse, having a medical emergency overseas and needing to be repatriated home.

Many credit cards offer travel insurance as part of membership benefits. NAB’s Visa Platinum Card, for example, offers significant travel cover when you spend $500 or more on travel related expenses on the card. Before you next travel, check what your card offers. It may be cheaper than taking out additional travel insurance.

Main picture: Tuk Tuks are the best, cheapest and most fun way to get around Phnom Penh 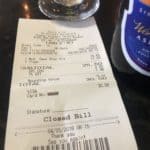 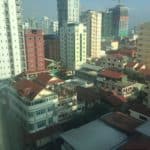 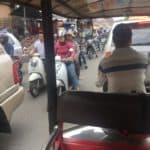 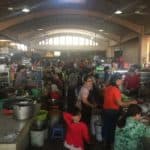 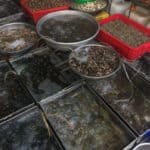 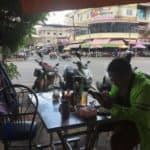 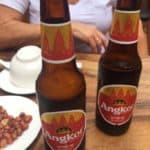 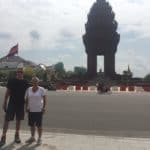 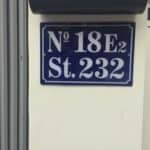 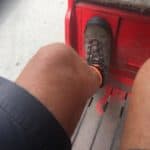