7-Star All The Way

Dubai. Where even a traditional Bedouin banquet in the desert is 7-Star.

I have been extremely fortunate in my professional career to have had the opportunity to travel to some amazing places and see and experience some amazing things. Communication industry events and academic conferences have seen me travelling internationally to the United States, Europe, The United Kingdom, the Middle East, China, Korea and to Asia – Malaysia, Indonesia, Vietnam, Singapore – on numerous occasions. However, one destination in particular stays in my memory as being particularly amazing, not such much for its natural beauty, more for its personification of what extraordinary vision combined with massive wealth and state-of-the-art technology can create.

I am of course talking about the city/state of Dubai in the United Arab Emirates.

Dubai is known for luxury shopping, ultramodern architecture and a lively nightlife scene. It is also the largest and most populous city in the United Arab Emirates (UAE). On the southeast coast of the Persian Gulf, it is the capital of the Emirate of Dubai, one of the seven emirates that make up the country. Dubai is a global city and business hub of the Middle East.

Through my membership and directorship of the International Advertising Association (IAA) in Australia, I had the opportunity to attend the Association’s  bi-annual World Advertising Congress and World Education Conference in Dubai. I had never visited this part of the world before so I was excited about both the opportunity to attend such a prestigious event and visit such an amazing city – an ultra-modern metropolis built on the desert sands of the Persian Gulf. The first human settlement in the history of Dubai was in approximately 3000 BCE, when the area was inhabited by nomadic cattle herders. In 1966, oil was discovered in Dubai, which changed the country beyond recognition and led to Dubai becoming the vibrant, modern, business-centred city it is today. Today Dubai is arguably the world’s most modern city. I’d seen the pictures but nothing prepared me for Dubai in the flesh!

The IAA World Congress was hosted by the UAE Chapter of the IAA and attracted more than 2000 delegates from over 50 countries. The event was themed ‘Challenges of Change’ and included discussion topics addressing the theme ‘Remaining credible in an incredible world’, reflecting the role of advertising in today’s dynamic global consumer marketplace. The event was held in the Dubai International Convention and Exhibition Centre and I stayed at the Ibis World Trade Centre Hotel, just a short walk from the Convention Centre.

The IAA does international industry events extremely well. Invariably there are amazing supporting social networking events, including industry dinners presented by the host IAA chapter. Dubai was no exception. On the first evening of the 3-day Congress, I attended a welcome cocktail party at the Convention Centre. A great opportunity to catch up with industry friends and academic colleagues.

Dinner on the second evening was at Dubai’s amazing Media City. Dubai Media City (DMC), was launched in January 2001 to establish Dubai as the region’s leading media hub. DMC encompasses a media community of over 20,000 people working in over 2,000 regional and international media companies that are pushing the limits of creativity every day. Media City is home to most of the emirate’s major media companies including MBC, the BBC, CNN and Reuters. The Media City Amphitheatre is probably Dubai’s best-known outdoor concert venue. Rita Ora, The Jacksons, Chaka Khan, Steve Aoki, The Vamps, Carlos Santana, Sting, Take That, Paolo Nutini, The Stone Roses, Craig David and so many more have all performed at the venue. All kinds of festivals and events are staged here, such as Taste of Dubai and the annual Winter Festival. As tens of thousands of people work in the neighbourhood there is an abundance of cafés and cool eateries for office-dwellers and visitors.

As IAA delegates, we were treated to a tour of Media City and its facilities before a lavish outdoor dinner on the grassy lawns with the spectacular Dubai night skyline as a backdrop.

Dubai is famous for many things – ultra-modern architecture, traditional markets, international shopping precincts. But perhaps it is best known for creating the ‘spectacular’, including the spectacular man-made Palm Islands; a man-made island group in the shape of a palm tree, and the World or The World Islands, an artificial archipelago of various small islands constructed in the shape of a world map.Seen from the air, these man-made locations are truly unique. Then there’s Burj Al Arab Jumeirah, Dubai’s most iconic hotel and the world’s first 7-star hotel. The iconic sail-shaped silhouette of Burj Al Arab Jumeirah stands tall as a beacon of modern Dubai. Repeatedly voted the world’s most luxurious hotel, this stunning destination offers the finest in service – right down to an optional chauffeur-driven Rolls-Royce! It also offers private beach access, a breathtaking terrace with pools and cabanas as well as some of the world’s best dining venues, including the highly acclaimed Al Mahara. Prior to our evening at Media City, we were treated to an afternoon tour of the hotel. I didn’t bother checking room prices!

The third evening’s event was even more spectacular – a traditional Bedouin banquet in the desert. And I do mean in the desert, with hundreds of IAA Congress delegates heading for the sand dunes in buses (not on camels) for a night to truly remember amid the beauty and serenity of the emirates’ desert landscape. We arrived at our specially-appointed desert camp to relax in Bedouin-style tents and on woven rugs to engage in a host of leisure activities including falcon shows, camel rides and of course, a traditional belly-dancer. What a night enjoying unique Bedouin food and hospitality. What an amazing experience. Definitely 7-Star!

While the conference days were full of industry talks and round-table discussions relating to professional development and specifically, strategies around the education of the next generation of your professionals, there was also time to see a little of Dubai. With colleagues, we arranged an afternoon tour of Dubai’s Old Town to walk among the wind towers of  Al Fahidi where the gypsum and coral buildings have been painstakingly restored to their former glory. Dubai’s Old Town is home to traditional markets or souks, authentic meals and cultural experiences. The souks are an experience in themselves. Since the city’s early days merchants from neighbouring countries would sail up the Dubai’s famous ‘Creek’ to peddle their wares – gold, spices, perfumes and textiles. There are four individual souks: the Old Souk, Spice Souk, Gold Souk and Perfume Souk. I defy anyone to visit the souks and leave empty-handed. I certainly didn’t.

Nearby is the impressive stone Al Fahidi Fort. Built around 1799 to defend Dubai against invasion, the fort is arguably the oldest building in the city and today houses the Dubai museum, offering a fascinating insight into the city’s culture and heritage. What I love about Old Town is the complete contrast to the modern Dubai. Old world heritage, history and culture versus modern lifestyle, contemporary customs and sheer unashamed opulence.

Dubai and the UAE. What an experience. I‘ve never been anywhere quite like it. 7-star all the way. Put it on your ‘bucket’ list. I’m glad that I did!

If you are a passport holder from a host of countries including Australia, New Zealand, the United Kingdom, the United States and Canada no advance visa arrangements are required to visit the UAE. You simply disembark your flight at Dubai International Airport and proceed to Immigration where your passport will be stamped with a 30-day visit visa free of charge. For Australian, you will need to have a valid passport with a least 6 months remaining on the passport.

While Dubai is a westernised city, there are certain laws and customs you should be aware of before visiting. The most common relate to appropriate dress, appropriate interactions, care when speaking, care when taking photographs and the consumption of alcohol. In general, for women it is wise to dress conservatively. You will need to be completely covered when visiting a mosque. Take care with public displays of affection. Kissing and cuddling in public is not allowed. Do not swear in public. If you are taking photographs of Middle Eastern people, seek their permission first. Dubai is an Islamic city. Drinking alcohol is confined to licensed areas.

The climate of Dubai is generally warm and sunny. In summer it is hot and humid with temperatures reaching 45 degrees C. Even the sea temperature reaches 37 degrees C. Conversely, the desert can be quite chilly in the evening. So, consider your proposed itinerary and pack accordingly.

The dirham (Dhs or DH) is the official currency of Dubai and the UAE. However, US dollars are accepted in most places.

Main picture: A traditional Bedouin banquet in the desert is 7-Star 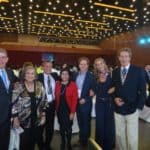 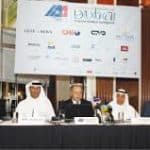 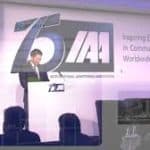 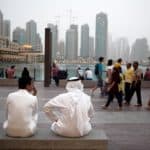 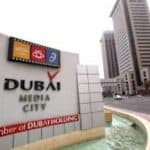 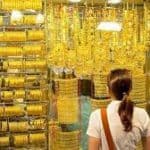 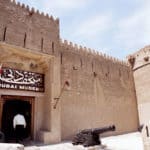 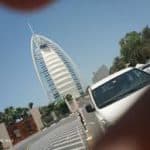 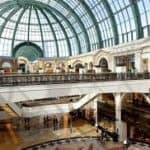 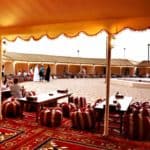